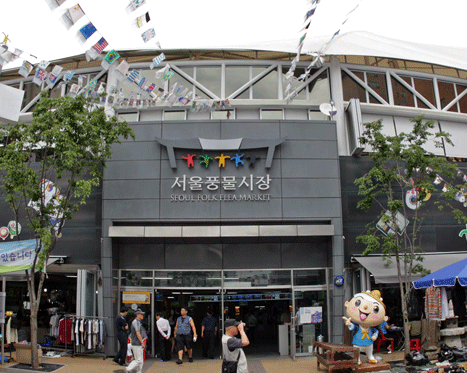 Previously, Hwanghak-dong had a flea market dealing in a variety of traditional furniture, used electronics and clothing, among others. As the market became popular among citizens, the number of street shops and vendors increased. At the beginning of 2004, 'the Dongdaemun Folk Flea Market' was set up in what was previously the Dongdaemun Stadium, a sports complex, because the Cheonggyecheon Stream Restoration Project included 'the Hwanghakdong Dokkaebi Market' area.

The Seoul Folk Flea Market is composed of seven buildings identified with the 7 colors of a rainbow. The flea market sells a whole variety of goods including foods, clothing, luggage, footwear, electronics, sporting goods, antiques, ceramics, and other daily supplies. The 2-story red colored building acts as a food court. The first floor of the green-colored building deals in antiques and handicrafts that refresh visitors' memories. The other buildings sell a whole range of goods from clothing to fashion accessories, sporting goods and various household items.