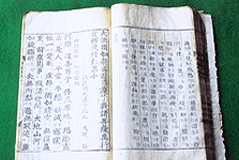 Transcribed by Monk Gyehwan of Onneung Gaewonyeonsa during the reign of Hwijong in the Song Dynasty, the original title of the work is “Daebuljeongyeoraemilinsujeungryo-eui jebosal manhangsuneumeomgyeong.” A canonical work in the center of the development of Zen Buddhism, Neungeomgyeong is thought to take precedence over ‘moderation’, as Buddha taught neungeomgyeong to warn or advise people against engaging in lustful activities. It is also the first Buddhist canonical work to be translated into the common Korean language, with exegesis by King Sejo, the seventh king of the Joseon Dynasty, in the eighth year of his reign (1462) and translated by Han Gye-hi and Kim Su-on with the help from Sinwi the Royal Monk. Its value in Buddhist studies is immeasurable, as it provides interpretations and explanations written in Korean for many Buddhist terms written in Chinese characters.