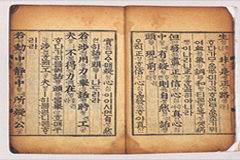 Priest Naong, the renowned Buddhist monk and scholar of the late Goryeo Dynasty, went to visit Deokri, also known as Priest Mongsan (‘Mongsanhwasang’) in Yuan in the second year of King Chungjeongwang’s reign (1350). The book is a concise compilation of the lawful teachings Priest Naong received from Priest Mongsan, and, accordingly, came to be called ‘Mongsangboepeo Concise’. Renowned Buddhist monk Sinwi was given a royal order from King Sejo, the seventh king of the Joseon Dynasty, to provide explanations and annotations in Korean to this work. The entire work consists of six volumes of the lawful teachings of Priest Mongsan and one volume of the lawful teachings of Priest Naong. Popularly read by those entering the Buddhist order, it was commonly circulated around the world through repeated printing. The date of the original printing of the first edition remains uncertain.