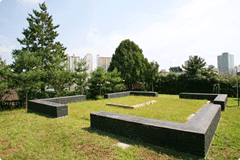 Seonnongdan, Historical Relic No. 436, is a shrine devoted to holding offerings to Jesin, the god of agriculture, and Hujik, the god of grains, in wishing for the year’s good harvest. Agriculture and sericulture were the primary industries that formed the basis of Joseon. The king performed a sacrificial ritual every year at Seonnongdan in an effort to enlighten his subjects of the importance of these industries, while the queen engaged in sericultural activities with women at Seonjamdan. The tradition of the king encouraging his subjects to participate in agriculture by example (‘Seonnong’) can be dated back to the era of the Three Ancient Kingdoms of the Korean Peninsula. According to The Chronicle of the Three Kingdoms, a historical account of the era, ancient kings used to perform rituals called ‘Seonnongje’ in Taesalgok in the south of Myeonghwalseong after the first day of spring. Then they performed ‘Jungnongje’ at Sinseongbukmun after the first day of summer. After the first day of autumn, they performed ‘Hu-nongje’ in Sanwon.Another source of history records that King Seongjong of the Goryeo Dynasty performed the ritual of gigokje (a ritual wishing for the year’s good harvest, performed on the first day of the year by lunar calendar) in his second year of reign (983) by tilling a piece of land himself, offering sacrifices to Sinnong, and burned incense for Hujik. This shows that Seonnong originated from the period of Silla, but the sacrificial incense purning for Sinnong and Hujik began with King Seongjong of the Goryeo Dynasty.

Rituals were performed even more frequently by the time Joseon was founded as the dynasty was deeply concerned with consolidating the basis of agriculture as the prime means of livelihood for peasants. Once the specific date of that year’s ritual was decided by Yejo, the king would prepare himself for three days before the date of ritual and would perform it at the daybreak on the given date, amid his senior statesmen and subjects watching.

Once the ritual ended and the sun arose, the king held a demonstration of tilling the land with a Korean plow, an activity known as Chingyeongrye. It was an elaborate ritual involving the king performing an actual act of agriculture designed to enlighten people of the importance of agriculture.

Once all the associated activities were done, the king would order that a cow be killed and cooked and shared among all his subjects, including the aristocratic statesmen and the common, who had participated in the day’s event. The traditional food shared on this occasion was originally called ‘Seonnongtang’, which is now known as ‘Seolleongtang’, a hugely popular soup in Korea.

Seonnongdan was also the place of giuje (a ritual wishing for rain after an extended period of draught) and the king himself would reap rice.After Japan annexed Korea in 1910, the Seonnong Jehyang ritual and Chingyeongrye came to be forgotten. The Japanese colonial government attempted at completely eliminating the cherished cultural assets throughout Korea. The residents of the surrounding neighborhoods, however, came to form the Seonnongdan Friends’ Society in the late 1970s and began to re-perform the ritual long practiced before Korea was colonized. The Seonnong Jehyang is now held on April 20 every year under the sponsorship of the Ministry of Agriculture, the Dongdaemun Gu Office, and the Dongdaemun Culture Center.