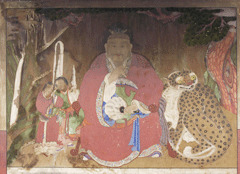 A Sansindo with a style of folk painting, it paints a mountain spirit at the center in the form of an ascetic on a seat with an armrest, serving a priestling on the right, and a tiger, the symbol of mountain spirit, on the left. The mountain spirit, which is drawn in a large scale at the center of the painting, features a great physical frame, round and broad head with white hair and a transparent hood that resembles a hat while stroking his long beard with his right hand while holding a feathery fan in his left. The tiger with vivid body patterns has pointy ears and two feet lifted as it crouches, which is comical in a folk-art style. The two dongja's located on the right exhibit a friendly appearance as if they are talking to each other while holding objects over their shoulders. The background shows old pine trees and deep valleys with a towering waterfall, expressing the deep, tranquil mountains and valleys that are typical of Sansindo or Dokseongdo (Painting of Pratyeka Buddha).