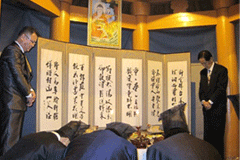 The old tree located at 412 Imun Dong (near Imun Dong Cathedral) used to be worshipped as the guardian spirit of the area until the housing development three years ago. The event is now held for the guardian spirit of the area resident in the Tojeong located in the back of the place at 187 Hwigyeong Dong.The leaders of the area built a sanjedang at 194 Hwigyeong Dong in 1967 to hold the event. The residents in the area raised a fund in 1989 and have been ever since holding the ritual under the sponsorship of the Tong Friends’ Society. As the sanjedang was demolished due to the construction of central line (between Cheongnyangni and Deokso) in March, 2000, the ritual began to be held on the night of October 3 (by lunar calendar) each year in the conference room of the Dong office in wishing for the safety and health of the entire nation. Since the construction of a palgakjeong(an octagonal pavilion) on the site of the Dong office at 195-5 Hwigyeong Dong in 2004, the ritual has been held there.