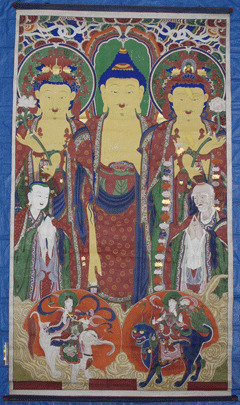 A painting with an Amitabha at the center and Avalokitesvara Bodhisattva and Mahasthamaprapta Bodhisattva supporting from the side, at the foot of the Buddha Triad sit Buddhist Monk Gaseop, Buddhist Monk Anan, Child Manjusri and Child Samantabhadra.
The Amitabha at the center has a large, half-moon-shaped central protrusion, which also has a round protuberance at the top, and his left hand is placed on his chest while his hand is stretched out downward. His clothing features many round shapes. Avalokitesvara Bodhisattva on the left wears a crown with hwabul (nirmāna-Buddha) and holds a white lotus flower with his two hands over his right shoulder. Mahasthamaprapta Bodhisattva on the right wears a crown with jeongbyeong (kundika) and also holds a white lotus flower with his hands in symmetry with Avalokitesvara Bodhisattva. They all wear sacerdotal robes that cover both of their shoulders and their clothing also have round shapes drawn just like bonjonbul.
Below Avalokitesvara Bodhisattva and Mahasthamaprapta Bodhisattva, Buddhist Monk Gaseop, a white-haired bigu, or a Buddhist priest, and Buddhist Monk Anan, a young bigu, stand. At the bottom of the painting, Child Manjusri on a blue lion and Child Samantabhadra on a white elephant are depicted inside round mandorla.
A type of painting that features Amitabha Buddha Triad, Buddhist Monk Gaseop, Buddhist Monk Anan, Child Manjusri and Child Samantabhadra on a lion and an elephant, respectively, was a popular format in Seoul and the Gyeonggi region after the mid-19th century, so this Buddhist painting also reveals characteristics in the style of the time. Looking at the bottom of the painting, it has been known that this painting was painted on October 28th, 1901, the 5th year of Emperor Gwangmu’s reign, and completed on November 20th, and was led by Daeeun Donhee with the participation of Gyeeun Bongbeop, Hanbong Eungjak, Boam Geungbeop, Cheongam Unjo, Hangok Dongbeop and many other Buddhist monks.