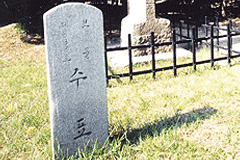 Supyos were installed in an effort to measure the level of the river after the pluviometer wasinvented to measure precipitation during King Sejong’s reign. There were two supyos installed originally: one along the Han River, and the other along Cheonggyecheon. The supyo along the Han River consisted of the scale directly engraved into a rock by the river, while the supyo of Cheonggyecheon consisted of a wooden pillar planted on a low stone. Only the supyo of Cheonggyecheon survives to this day. It was improved into a stone pillar during King Seongjong’s reign (1469 ~ 1494). It is a granite pillar that is 3 meters long and 20 centimeters wide. It has a ‘headstone’, resembling a conical hat with lotus patterns engraved. The hexagonal base stone is planted deeply in the ground. The scale was engraved in both sides of the stone pillar for every cheok (21cm), up to 10 cheok. The third, sixth, and ninth cheoks were given a special ‘0’ mark and indicated as ‘Galsu (draught)’, ‘Pyeongsu (average)’, and ‘Daesu (flooding)’. The ordinary water level is more or less around the sixth cheok, The level of water exceeding the ninth cheok signaled a looming danger of flooding and helped people evacuate beforehand.