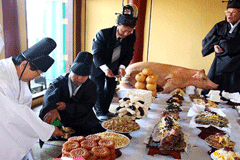 hough the exact origin is not known, it is believed to have a long history, considering that a zelkova tree stands nearby that seems to be more than 300 years old. Given that Jangnyeongdang is located on a higher ground than its surroundings, it is assumed that a rite and a gut were held in October of the lunar calendar. A theory states that the name of the rite originated from a king at the time who commanded to hold a rite named “Jangnyeongdang” after he learned that there had been many deaths in the Dapsimni area due to various infectious diseases and damages from storms and floods.