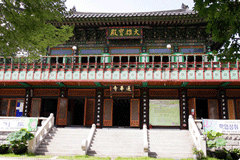 Yeonhwasa, a Buddhist temple originally built to mark and guard the gravesite of Queen Yun, who was forced out of her position and the royal court before her son went on to become King Yeonsangun, remained as an empty site for a long time after King Yeonsangun was dethroned. The temple, however, again came to be used to mark and guard the royal graves as King Gyeongjong and his second wife, Queen Seonui, came to be buried here in the first year of King Yeongjo’s reign (1725). Although the temple was burned down during a battle in 1882, it was reconstructed by Monk Jeongdam. According to ‘the Diary of Myoryeonsa Reconstruction in Cheonjangsan’, a writing written in October, 1884, dedicated to a statute of Buddha, and found in 1993, the original name of the temple was ‘Myoryeonsa’ after a monk named Myoryeon. He garnered such amounts of respect and affection from the townspeople for his good character and virtuous deeds that people came to call the temple after his name. The exact date around which the name ‘Yeonhwasa’ was adopted remains uncertain. The area surrounding the temple used to be lush green forests and rice and paddy fields, but it is now surrounded by schools and apartments.