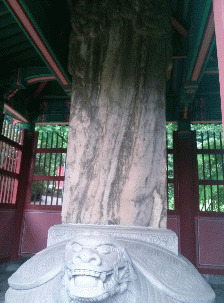 “Stele for King Sejong from Yeongneung Royal Tomb Site” was erected in 1452 (the 2nd year of King Munjong’s reign) as a form of a bibliography to forever commemorate the life and achievements of King Sejong, the 4th king of Joseon, who established and solidified the foundation of Joseon and its culture. The writing was composed by Jeong In-ji (1396-1478), a civil official who made a significant contribution to the creation of King Sejong’s Hunminjeongeum (The Proper Sounds for the Instruction of the People), and written by Prince Anpyeong Yi Yong (1418-1453), the third son of King Sejong and a renowned calligrapher of the generation. Though the surface of the stele is severely corroded and exfoliated, which makes it difficult to understand the details of the epigraph, it still retains great value thanks to certain important parts, including “···gyeom seonggyungwan daesaseong sin jeongin" and "… sin yong bonggyoseo", that are still visible. In addition, isu (head stone), which was manufactured with the stone as a single unit, has mostly maintained the original form in order to serve as a critical data for research on steles not only for the early Joseon kings but also erected through the dynasty.