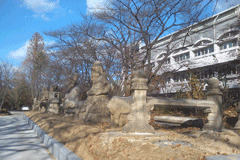 Yeongneung, Tomb of King Sejong and his wife Queen Soheon, was originally located at San 13, Naegok-dong, Seocho-gu. During the time of King Yejong (1469), the stone figures composing a part of the former Yeongneung could not be transferred to Yeoju where today’s Yeungneung is located, and were left hidden underground only to be excavated again around 1973 and 1974. The figures were then moved to the King Sejong the Great Memorial Hall. 12 stone figures from the former Yeongneung site, including “Sejong Daewang Sindobi”, were designated as Tangible Cultural Heritage of Seoul on March 15, 2002.