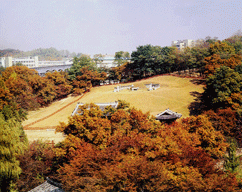 Yeonghwiwon is the grave of Queen Sunheon Eom, the second wife of Emperor Gojong who was also the 26th king of the Joseon Dynasty. Born under King Cheoljong’s reign in Seoul in 1853, Queen Eom entered the royal court at an early age and grew up to become one of the security guards for Queen Myeongseong, and later, one of the concubines of King Gojong. Queen Eom lived with King Gojong in the Russian legation in 1898. Her status was raised to ‘Gwiin’ after she gave birth to Prince Eun in 1897, and was later coronated as Queen Sunbi (Sunheon Gwibi). Queen Eom died at the age of 58 on July 20, 1911. Her mortuary tablet is stored at Chilgung, located at Gunjeong Dong, Jongno Gu. Always interested in modern education, Queen Eom established Yangjeong's Suk in 1905 and then Jinmyeong Girls’ School later. She also gave a generous donation to the foundation of Sukmyeong Girls’ School, leaving a big impact in the development of modern academia in Korea. A pair of Moninseok, a pair of Maseok, Sangseok, Jangmyeongdeung, and a pair of Mangjuseok are dedicated to her and placed on this site. The site also houses Sunginwon, the grave of Lee Jin, the son of Lee Eun who later came to be known as ‘King Yeongchin’. Lee Jin was born on August 18, 1921, and died on May 11, 1923. Although the site also used to house Hongneung, the grave of Queen Myeongseong, it was later relocated to Geumgok in Namyangju, Gyeonggi, in 1919.