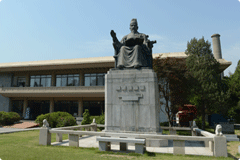 The great king Sejong Memorial Hall, which opened on the Hangeul Day in 1973, commemorates the various cultural and political achievements of King Sejong and provides opportunities for visitors to experience and study part of that era’s history. The two-storey memorial has a total building area of 2,475㎡ and is located over an area of 18,500㎡. It consists of four exhibition rooms, each featuring the biography, Hangeul (King Sejong’s invention), Sejong’s achievements in traditional Korean music, and Sejong’s contribution to science, as well as a lecture hall and a reading room.

The ‘Biography’ exhibition room shows the achievements of Emperor Sejong during his reign of 32 years over 14 strips of drawings. The ‘Hangeul’ exhibition room displays works of literature relating to the development of Hangeul that were written either during or after King Sejong’s reign. It also displays the works of literature King Sejong looked up to invent hunminjeongeum, rubbed copies of the letters of foreign languages, and other artifacts showing mechanization of hangeul. The ‘Science’ exhibition room houses press-related artifacts that revitalized the press and publication industry during King Sejong’s reign and other inventions, such as the pluviometer, sundial, and the water clock. It also displays various astronomical instruments, maps, and oriental medicine ingredients. The ‘Korean Music’ eshibition room shows various musical instruments, clothes of musicians and dancers, and Jinyeoncheongdo that were developed during King Sejong’s reign. Other treasures stored at the memorial include Neungeomgyeongeonhae (Treasure No. 763), Mongsanhwasangbeopeo Concise with Korean Annotations (Treasure No. 769), Geumganggyeongsamgahae (Treasure No. 772-(1)), Bokgagcheonsangyeolcha-bunyajido (Treasure No. 837), and Supyo (Treasure No. 838). 12 stone monuments excavated from Guyeongneung, including ‘Sejong Daewang Sindobi’, were designated as Tangible Current Asset No. 42 of Seoul on March 15, 2002.