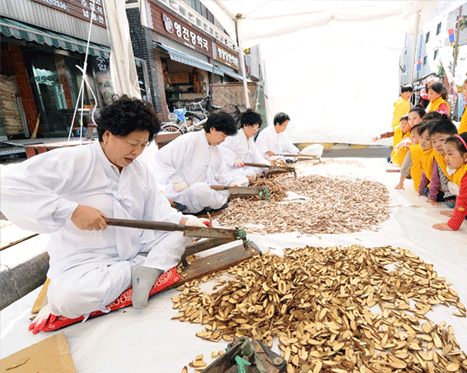 It is not only responsible for about 70% of all medicinal herbs dealt in Korea but also visited by many foreigners as global interests in Oriental medicine grow.

From sanghwang, chaga and ganoderma mushrooms to gugija, omija, milkvetch and wilfordi roots, people can easily find desired medicinal herbs, delivered from all over the country, at Seoul Yangnyeongsi, even those that are difficult to obtain. Since all of the industries related to Korean medicine and medicinal herbs are gathered here, shopping, medical treatment services and health counseling are also possible. 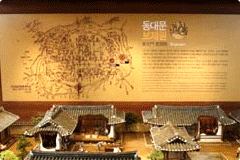 To the west of Seonnongdan, about 1 km outside of Heunginmun (today's Anam-dong Rotary), "Bojewon" existed. "Won" is a facility that was set up on major roads to offer lodging and food to those traveling for government tasks during the Joseon Dynasty, and there were several won's in or near Seoul, including Hongjewon outside of Seodaemun, Itaewon outside of Namdaemun and Jeongwanwon outside of Gwanghuimun Gate. Bojewon was established outside of Dongdaemun on the path going from Hanseong, the capital, towards the northeast. In addition to the provision of accommodations and meals for travelers, it also operated a Korean medicine clinic, euijwa, gansahoe, etc. to perform medical checkups and exams for the impoverished during the reign of King Taejong to Seongjong.

Though Bojewon's primary task was to treat patients within the capital, it often took in those who had no place to go, treat those who fell sick on the road and, even buried the dead, fulfilling its duty as a relief agency. According to the Annals of Sejong, there are records that “Bojewon and Hongjewon were built with two rooms in the shape of a Chinese character "土" to be used as relief sites where the hungry may come and eat”. For centuries, there were many merchants near Bojewon outside of Heunginmun who dug up medicinal herbs themselves in Gyeonggi-do and Gangwon-do to sell them near Seoul. This is because Bojewon was set up on the path to Hanyang, and many kinds of medicinal herbs were easily obtained at Bojewon. Thus, the growth of Seoul Yangnyeongsi in Yongdu-dong and Jegi-dong area stems from this historic tradition.

When you visit Seoul Yangnyeongsi, visit Herb Medicine Museum and go on a trip of herbal medical treatment with a museum guide (docent). The museum has an exhibition hall, herb experience hall, seminar room and storage, exhibiting 409 pieces of relics and 500 kinds of medicinal herbs.