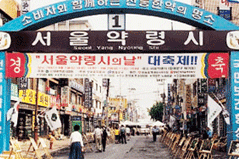 ‘Bojewon’ used to be located in the west of Seonnongdan, outside Heung-inmun (the present-day Anam-dong Rotary). The road, leading out from Heung-inmun, forks in two ways once from Dongmyo. Bojewon could be found if a traveler followed the road in the northeastern direction. A traveler would have reached Nowon Station from Bojewon, passing by Anam-dong-cheon, Jegi-hyeon, Goam, and Suyu-ri. This road was a major channel through which drapery was transported between the capital city and other provinces, such as Gangwon-do and Hamgyeong-do. The expansion of the road system also caused the expansion in the network of ‘yeok’ (stations) and ‘won’ (inns for government officials). A yeok was, by principal, to be installed along the road at every 30-ri linking Seoul to other regions of Korea.

The yeok was through which important government documents were exchanged between the central and local governments, and government goods and taxes, wages, and foodstuff were also traded. Seoul had two yeoks in its vicinity: one was Cheongpa-yeok, located about 2 ri away from Sungnyemun, and the other won was Nowon-yeok, about 10 ri outside Heung-inmun. A won was also installed along each thoroughfare in order to provide accommodation and food to travelers. Because a yeok and a won were commonly found together, they used to be collectively referred to as ‘yeok-won’. Wons in and around the area of Seoul included Hongjewon outside Seodaemun; Yitaewon outside Namdaemun; and Jeon-gwanwon outside GwanghImun. Hongjewon and Yitaewon are still familiar names to many Koreans. Bojewon was located just outside Dongdaemun, in the main northeastern road leading into and out of the nation’s capital city. In addition to serving government officials and travelers, Bojewon also housed oriental medicine clinics, doctors, and nurses from time to time between the reigns of King Taejong and King Seongjong to provide medical services to the poor. Although Bojewon was mainly charged with rescuing and treating patients found within the walls of Seoul, it sometimes provided accommodation to those without homes or families and treated people who became ill while traveling, even providing funeral services. An official historical record dating back to the time of King Sejong mentions that "Bojewon and Hongjewon were created, with two rooms each, in order to provide relief to the famished." Seoul Yaknyeongsi Market came to be naturally formed as dealers of oriental medical ingredients produced across the nation came to this part of the capital city by way of Cheongnyangni Station and Majang-dong Expressway Bus Terminal. Now stretched over an area of 23,500m2 between Jegi-dong and Yongdu-dong, the market houses 899 stores and shops related to oriental medical ingredients, including 324 oriental medicine clinics, 312 pharmacies, 57 wholesalers of medical ingredients, and 99 medical ingredient exporters.